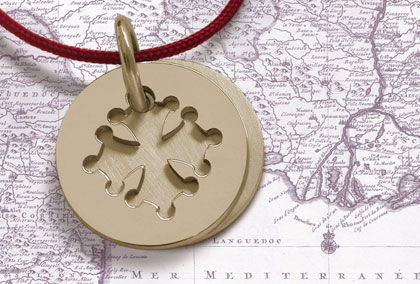 The Occitan cross (crotz occitana) is also called the Toulouse cross or Venasque cross. Today emblem of the Occitan region, it originally symbolized a geographical area that extended along the entire Mediterranean coast, from the former County of Nice to the Aquitaine coast. More generally, it represents the Occitan language and culture. Quite logically, this figure is only found in the South of France.

We can find several hypotheses as to its symbolism: the twelve cheekbones would represent, according to beliefs, the 12 astrological signs, the 12 Titans, the 12 labours of Hercules, the 12 tribes of Israel, the 12 months of the year by season, the 12 apostles?

Its origin also remains subject to various interpretations. During antiquity, the Copts of Alexandria who crossed the Mediterranean Sea already had a swollen cross as their emblem. It is also known that a cross of this type existed in Chinese Turkestan around 450 A.D. It also bears a strong resemblance to the Cross of Pisa. The cross could have been imported by the Visigoths during their invasion of Gaul.

In the Middle Ages, through the interplay of marriages, alliances and inheritances, the Occitan cross became the coat of arms: from the tales of Toulouse, the tales of Forcalquier, the House of Venasque, the House of Gigondas, the Viscounts of Marseille, the Adhémar of La Garde.

Today, the Occitan cross symbolizes the attachment to a common culture, that of the Pays d'Oc.